Washington DC, USA to Geneva is an approximately 13-hour flight. The time zone changes from Eastern Standard Time to Central European Standard Time, which is usually a 6 hour difference. Traveling from Washington DC in October, things will get a bit cooler in Geneva: highs are around 61°F and lows about 46°F. Finish your sightseeing early on the 28th (Wed) so you can travel to Brig.
more less

©
Brig, officially Brig-Glis is a historic town and a municipality in the district of Brig in the canton of Valais in Switzerland.The current municipality was formed in 1972 through the merger of Brig, Brigerbad and Glis.Together with other Alpine towns Brig-Glis engages in the Alpine Town of the Year Association for the implementation of the Alpine Convention to achieve sustainable development in the Alpine Arc.Brig-Glis was awarded Alpine Town of the Year 2008.The official language of Brig is German, but the main spoken language is the local variant of the Alemannic Swiss German dialect.HistoryThe name Brig is derived from Briva, or "bridge." Its older houses are very Italian in appearance, while its most prominent buildings (Stockalper Palace, former Jesuits' college and Ursuline convent) all date from the 17th century, and are due to the generosity of a single member of the local Stockalper family, the baron Kaspar Stockalper.The prosperity of Brig is bound up with the Simplon Pass, so that it gradually supplanted the more ancient village of Naters opposite, becoming a separate parish (the church is at Glis, a few minutes from the town) in 1517. Take a break from the city and head to Aletsch Glacier and Oeschinen Lake. You'll find plenty of places to visit near Brig: Klettersteig Gemmi-Daubenhorn Leukerbad Wallis Schweiz (in Leukerbad), Bachalpsee Lake (in Grindelwald) and Wengen (Wengen Mannlichen Aerial Cableway & Molitor). And it doesn't end there: test your team's savvy at Trapgame, take in the spiritual surroundings of Felsenkirche Eglise St.Michael, stroll through Zauberwasser, and hike along Alpine Trails.

For ratings, photos, more things to do, and more tourist information, refer to the Brig trip itinerary builder.

Traveling by car from Geneva to Brig takes 3 hours. Alternatively, you can drive. Expect a daytime high around 57°F in October, and nighttime lows around 42°F. Cap off your sightseeing on the 2nd (Mon) early enough to catch the train to Zermatt.
more less

Attractions like Gornergrat and The Matterhorn make great kid-friendly stops. Step out of the city life by going to Murmelweg Wanderung and Forest Fun Park Zermatt. And it doesn't end there: tour in style with Glacier Express, see the interesting displays at Matterhorn Museum - Zermatlantis, appreciate the views at Val d'Anniviers, and fly like a bird with a parasailing or paragliding tour.

Take a train from Brig to Zermatt in 2 hours. Alternatively, you can do a combination of bus and train. Finish your sightseeing early on the 7th (Sat) so you can take a train to Interlaken.
more less

You'll visit kid-friendly attractions like Skydive Switzerland and Harderkulm. Escape the urban bustle at Jungfraujoch and Parasailing & Paragliding. Get out of town with these interesting Interlaken side-trips: Grindelwald-First (in Grindelwald), Gimmelwald - Tanzbodeli (in Gimmelwald) and Bern (Barenpark & Church of the Holy Ghost). There's much more to do: appreciate the views at Lauterbrunnen Valley Waterfalls, admire the sheer force of Trümmelbachfälle, take your sightseeing to a higher altitude at The Eiger, and look for all kinds of wild species at Maennlichen.

You can take a train from Zermatt to Interlaken in 3 hours. Another option is to drive. In November, daily temperatures in Interlaken can reach 45°F, while at night they dip to 33°F. Finish your sightseeing early on the 14th (Sat) to allow enough time to drive to Lucerne.
more less 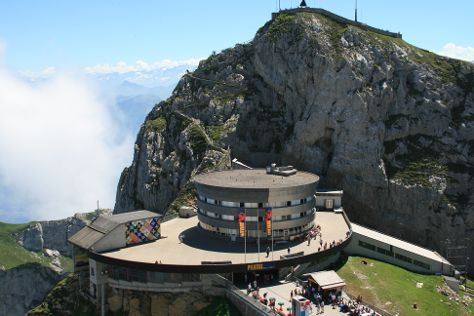 Escape the urban bustle at Mt Pilatus and Rigi. Kids will enjoy Lake Zurich and Chapel Bridge. You'll find plenty of places to visit near Lucerne: Appenzeller Brachtummuseum Urnaesch (in Urnaesch), Zurich (Bahnhofstrasse & Old Town) and Seealpsee (in Wasserauen). There's lots more to do: contemplate the waterfront views at Lake Lucerne, stop by Altstadt Luzern, take in the spiritual surroundings of St Mauritius Church, and take in the architecture and atmosphere at Hofkirche.

You can drive from Interlaken to Lucerne in 1.5 hours. Other options are to take a bus; or take a train. In November, plan for daily highs up to 48°F, and evening lows to 36°F. Cap off your sightseeing on the 21st (Sat) early enough to travel back home.
more less

Things to do in Lucerne