The cultural, economic, and political center of the country, Vienna has developed from its early Celtic and Roman roots into a medieval and Baroque city, with an old town that was designated a World Heritage Site in 2001.

You'll discover tucked-away gems like Ringstrasse and Biospharenpark Wienerwald. Step out of Vienna with an excursion to Die Perchtoldsdorfer Heide in Perchtoldsdorf--about 34 minutes away. And it doesn't end there: explore the historical opulence of Schonbrunn Palace, take in the spiritual surroundings of St. Michael's Church, admire the striking features of State Hall of the Austrian National Library, and see the interesting displays at The Hofburg.

For photos, maps, where to stay, and other tourist information, refer to the Vienna online tour planner.

Bengaluru, India to Vienna is an approximately 15-hour travel. You can also fly; or drive. The time zone difference moving from India Standard Time to Central European Standard Time is minus 4.5 hours. Prepare for slightly colder weather when traveling from Bengaluru in September: high temperatures in Vienna hover around 24°C and lows are around 13°C. Wrap up your sightseeing on the 13th (Sun) early enough to travel to Colmar.
more less

Things to do in Vienna 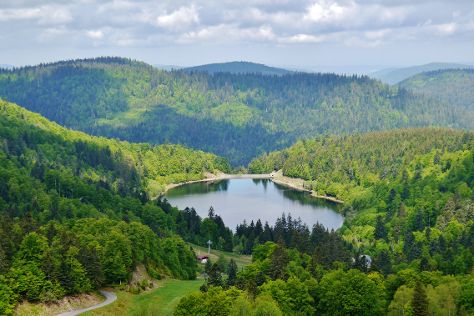 Situated along the Alsatian Wine Route, Colmar is renowned for its German and French culture, well-preserved old town, numerous architectural landmarks, and its museums.

On the 14th (Mon), get outside with Lac de Longemer, then take a memorable drive along Route des Cretes, then head outdoors with Le Hohneck, and finally examine the collection at Musee Espace des Metiers du Bois et du Patrimoine. Get ready for a full day of sightseeing on the next day: admire the striking features of Maison Schongauer, go for a walk through Grand Rue De Colmar, and then make a trip to Old Town.

For where to stay, other places to visit, more things to do, and tourist information, read our Colmar itinerary planner.

Things to do in Colmar

Aptly nicknamed the Eternal City, Rome is the birthplace of the Roman Empire, one of the world's greatest civilizations ever.

Kick off your visit on the 16th (Wed): steep yourself in history at St. Peter's Basilica, pause for some photo ops at La Pieta, then make a trip to Centro Storico Associazione Centro Storico, then ponder the design of Fontana dei Quattro Fiumi, and finally admire the striking features of Villa Borghese. On the 17th (Thu), you'll have a packed day of sightseeing: explore the ancient world of Colosseum, tour the pleasant surroundings at Colle Aventino, pause for some serene contemplation at Church of St. Louis of the French, then delve into the distant past at Pantheon, and finally ponder the design of Trevi Fountain.

Ask Inspirock to suggest an itinerary and make planning a trip to Rome fast, fun, and easy.

Getting from Colmar to Rome by combination of train, shuttle, and flight takes about 6 hours. Other options: do a combination of train, shuttle, and flight; or drive; or take a train. Plan for somewhat warmer temperatures traveling from Colmar in September, with highs in Rome at 32°C and lows at 18°C. Wrap up your sightseeing on the 17th (Thu) early enough to travel to Istanbul.
more less

Things to do in Rome

A physical and cultural bridge between Europe and Asia, the transcontinental city of Istanbul serves as a living reminder of the Roman, Byzantine, and Ottoman empires.

On the 18th (Fri), admire the landmark architecture of Basilica Cistern, pause for some photo ops at Sultanahmet Square, then admire the landmark architecture of Hagia Sophia Museum, then contemplate in the serene atmosphere at Sultan Ahmed Mosque, and finally contemplate the waterfront views at Halic. On your second day here, see some colorful creatures with Deepist Diving & Travel, take an in-depth tour of Istanbul Archaeological Museum, then get engrossed in the history at Topkapi Palace, and finally contemplate in the serene atmosphere at Rustem Pasha Mosque.

Plan a Istanbul trip in moments using our itinerary builder.

Fly from Rome to Istanbul in 6 hours. Alternatively, you can drive; or take a bus. The time zone changes from Central European Standard Time (CET) to Turkey Time (TRT), which is usually a 2 hour difference. Expect slightly colder weather when traveling from Rome in September: highs in Istanbul hover around 26°C, while lows dip to 26°C. Wrap up your sightseeing on the 20th (Sun) to allow time to travel to Tbilisi.
more less

Things to do in Istanbul

On the bank of the Mtkvari River and at the foot of Trialeti mountain range, Tbilisi's location has given the city strategic significance since it was founded in the 5th century.

You'll explore the less-touristy side of things at The Bridge of Peace and Nature & Wildlife Tours. Take a break from the city and head to Balloon Rides and Rustaveli Avenue. The adventure continues: examine the collection at Open Air Museum of Ethnography, explore the activities along Lisi Lake, pause for some photo ops at Monument to Characters of Movie Mimino, and take in the dramatic natural features at Legvachtahvi Gorge.

For where to stay, maps, traveler tips, and tourist information, use the Tbilisi vacation planning site.

Things to do in Tbilisi